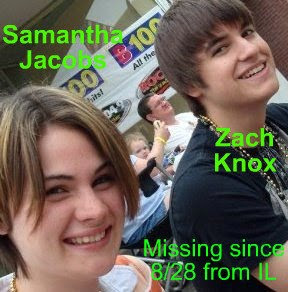 Sam and Zach have been missing since 8/28/09.
They are missing from Moline, Illinois and may be
traveling to Austin, Texas or New York.
Zach plays the guitar and may try busking or
show up at open mic nights to make money.
Sam has her right eyebrow pierced. They're 16 years old.
They're driving a 1999 maroon Lumina with IL plate number K177427.
If you see them please contact the Moline PD at 309-736-5642.
*******************************************************************
UPDATES :
8/31/09 - 10:22am
After talking to Sam for about an hour via email last night (masked IP addy, unfortunately) the only real new info I gleaned is that Zach doesn't have his phone any longer, either, he just didn't leave it at home. Hopefully he ditched it someplace where someone might find it and use it so we'd get at least an idea of which direction they went. Sam assures me they're fine and have a plan and said they'll "only" be gone for a year and a half at most. She spoke of the plan in general terms - nothing specific except that the future she'd mapped for herself wasn't the future she wanted and she felt trapped and wanted to focus on her writing. She didn't say anything specific about Zach's plan but it's safe to assume it involves his music. That's really all the new info I have but I'll keep people posted as she contacts me.
Original Post
8/28/09 - 9:34 pm
These are the details as we know them:
This morning, Sam was dropped off at Moline High School, where she is a junior, by her dad. By our best estimation, she then met up with her boyfriend, Zach Knox, and drove to Prospect Park where they left Zach's car. They then went to Samantha's dad's house and stole his vehicle...I want to say it's a Lumina but I'm hazy on that and will have to check.Yesterday Samantha cleaned out her savings account and cashed her paycheck - roughly $300. Zach had a little money as well.Zach took his guitars, clothes and laptop but left his various IDs at home, including his drivers license. Samantha, on the other hand, packed virtually nothing (not even her cell phone) but took her wallet and ID.Last week Samantha checked a book out of the library that was titled something like "A Guide to US Hostels". Zach's family found evidence that he'd been researching Austin, Texas on their home computer. They both expressed interest in attending college in New York - for Samantha it was a rabid interest, so there's every possibility that may be their destination.I'm appealing to their friends to please, please think back on anything that might now seem important that might not have seemed so at the time. Any comment, any kind of connections anywhere on the road - anything at all like that. There is very definite concern here for more than a few reasons, one of which is that Samantha's dad (who is a mechanic) said that the car they're driving is not fit for a trip like this. This isn't just a matter of "Oh they'll come home when they're done being kids" - there is a very real risk to their safety and the sooner we can close the net around them, the better. If I've tagged you I would appreciate it if you left yourself tagged until they're returned home safely - you never know if a friend of a friend might see it and remember something that might be of help. I'm asking you as a mother - a very tortured mother who honestly can't understand what I'm supposed to do right now - to help if you can.
Posted by Myshel at 9:00 AM No comments: 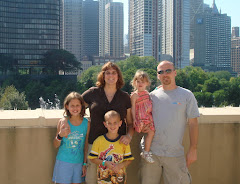 Myshel
I am a stay at home mom of 3 children, and a wife of 18 yrs. I am totally in love with my family. I think Im the luckiest girl in the world.